“A group of people wearing the same uniform does not necessarily constitute a team.”

Team unity is a very real entity that enhances everyone’s chances of success. When a leader can get the entire group to commit to their own improvement and success and to their teammates’ as well, amazing things can happen. It is one thing when five or six players are on the same page, but when twenty-five or thirty individuals buy into the concept of team, watch out. How many times have we seen a group of athletes who are in sync with one another defeat a more talented opponent? It is true that on closely-knit teams, the sum total often ends up being greater than the individual parts.

There are many elements in creating a strong sense of team. One key factor is having the players know that the coach genuinely cares about them as individuals. My fifty some years of coaching experience, along with the testimony of those in my survey, tell me one thing. The single most powerful force in coaching psychology and in successful coaching is the degree to which athletes feel cared for and respected by the coach. As one respondent wrote, “When I feel the respect and support of my coaches, I can’t help but want to try even harder.”

Caring is just a feeling or a concept unless it is accompanied by specific words and tangible actions on the part of the coach. Making everyone feel important and included is essential to creating strong team spirit. When this happens, team formation is inevitable.

There were two recent examples of this described in The Philadelphia Inquirer on Thursday, August 16, 2018. Gabe Kapler, manager of the Philadelphia Phillies, reached out and arranged a private meeting with Zach Eflin, a pitcher who had been optioned to the minor leagues even though he had been pitching well. The manager realized that Eflin was upset over the roster move. They sat down and talked. Kapler explained the decision and then listened to his pitcher. Afterwards Kapler said, “I care deeply about our players and I care deeply about what they are thinking. He is a pro and a stud, and I want him to be strong.”

The rookie manager also reached out to another player sent to the minor leagues, catcher Andrew Knapp. He encouraged Knapp to stay in touch with the pitchers by watching games and giving counsel like he had been doing. “He can give the same kind of feedback on the phone via Facebook, text etc. He is that important to our club.” What a smart move. Including these two team members will result in greater team strength.

Dick Vermeil coached the 1980 Philadelphia Eagles to the Super Bowl and was the head coach of the 1999 Super Bowl Champion St. Louis Rams. Part of Vermeil’s legendary success was based on his ability to create unified teams. In his words, “Football is so difficult. It is hard to remember that the players are individuals. It is important to feel a deep sense of concern for them as individuals and to transmit it.”

Coach Sexton skillfully weaves nearly five decades of highly successful coaching, along with the living testimony of current and former athletes into a compelling and insightful book that is not only for coaches, but for anyone in a position of authority.
It addresses the timeless question of how to gain the full cooperation of everyone involved, so that a team functions as smoothly and as effectively as possible.
Creating A Team Like No Other clearly provides the answers. 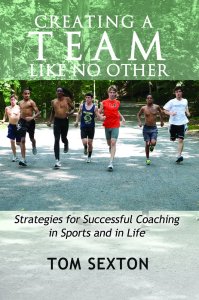