Asking an athlete to leave the team is a serious decision on the part of the coach. At best it can serve as a much needed wake-up call that hopefully proves beneficial in the life of a young person. At worst it can result in a lasting stigma of guilt, shame and embarrassment. When it comes to this topic, I always liked the attitude of Brutus Hamilton who coached track and field at the University of California from 1932 to 1965 and was a Hall of Fame Coach. One of his famous quotes is, “How can I help one of my runners if he is no longer on our team?” So, as a coach, I get the importance of being patient and walking the extra mile with certain athletes.
With that said, sometimes it is necessary and in everyone’s best interest that an individual leave the team. Deciding to leave the team is one thing. Being known as the person “who got kicked off the team” is far different. How to make this happen is very important; therefore I prefer that the athlete make this decision rather than have it thrust upon him or her. This procedure is called, “counseling the athlete off the team”. I learned this piece of coaching wisdom from my mentor and Hall of Fame Coach, Tom Donnelly of Haverford College.

About twenty years into my coaching career, I had a runner on our team who was not taking on his responsibilities. After a series of conversations with him, I realized that the necessary commitment was just not there. I spoke to him and said that I did not think things were working out and that he should consider leaving the team. I was immediately met with resistance so we talked. I told him that it was fine if he did not want to be on the team. I pointed out that it was not okay, however, to remain on the team without being as dedicated as his teammates were. I asked him to be honest and to ask himself if being on the team was what he really wanted. I was amazed when he said, “You are right, Coach. I don’t want it as much as the rest of the guys. I agree that I should leave.” I assured him that I would tell the team how much I respected his decision and his integrity. We parted on good terms and there was always friendliness between us whenever we spoke or passed one another in the hall.

It is important that athletes always be given the opportunity to save face. Sometimes they need to be assured that there are no hard feelings and that the coach will only have good things to say about them to their teammates after they leave. Peer acceptance and approval are always important. One time when a top runner left our team for disciplinary reasons, a reporter asked me why he left. I said it was for “health reasons.” Who needs public embarrassment?
As I look back on some of the athletes I allowed to remain on the team whom I suspect did not really want to be there and whose commitment was lacking, I now wish I had counseled them to leave the team. The last thing a coach and a team needs is someone who really does not want to be there or who has joined for the wrong reason such as outside pressure or to improve a resume, etc. It is not fair to the athlete or to the team to allow anyone to remain while not giving the required commitment. 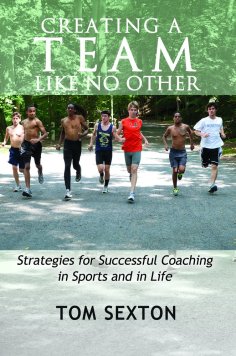 Coach Sexton skillfully weaves nearly five decades of highly successful coaching, along with the living testimony of current and former athletes into a compelling and insightful book that is not only for coaches, but for anyone in a position of authority.
It addresses the timeless question of how to gain the full cooperation of everyone involved, so that a team functions as smoothly and as effectively as possible.
Creating A Team Like No Other clearly provides the answers.